Talking over Skype with friend Allen Fisher in Hereford, I learned the sad news of Lol Coxhill’s passing. Lol & his music were among the great delights over my years in London during the seventies & early eighties. Below, the opening paras of the Guardian’s obit. You can read the rest here. 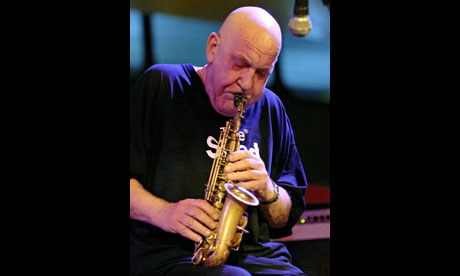 The saxophonist Lol Coxhill, who has died aged 79, was one of the great characters of British music – generous, gifted and amiably eccentric. He had long been a stalwart of the European jazz and improvised music scene, but he reached all kinds through his collaborations with a wide range of music – Afro-Cuban, R&B, soul, progressive, punk, minimalist, electronic and beyond – while remaining recognisably himself.

He achieved fame of sorts in the early 1970s with the crew of musicians surrounding the former Soft Machine songwriter Kevin Ayers, whose band the Whole World included the contemporary composer David Bedford and the teenage prodigy Mike Oldfield. Coxhill would turn up in all kinds of situations – jam sessions, improv nights and playing solo soprano saxophone by Hungerford bridge on the Thames. (He is thought to be the main inspiration for Real Good for Free, Joni Mitchell’s moving paean to buskers, though she changed the instrument played by her hero from sax to clarinet.)