Friend Alec Finlay has started a most elegant new blog — today’s post concerns a wonderful project of his around the poem IRISH by Paul Celan (full disclosure: I was involved in that project too). Below, the opening paragraph. For the full piece go here.

Grant me the right 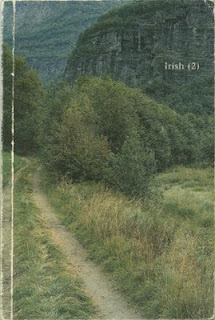 Back in 1997 I published an artist’s book with translations of one of the less well known poems by Paul Celan, ‘Irisch’, ‘Irish’, which opens the fourth cycle of Fadensonnen(Threadsuns). The poem was composed in April 1967, while the poet was confined to a sanitorium for severe depression. I was gripped by the intensity of its interiorized Celtic landscape – language-scape is the term coined by the poem’s renowned translator, Pierre Joris – which I attempted to further intensify by publishing a series of different translations, or versions, of the poem, following one after the other, allowing the variant phrases to accumulate page by page. It was accompanied by a series of amorphous gouaches by Sol LeWitt, and I copublished the book with my friend Peter Foolen in Eindhoven.
In 2002 I returned to the poem, inviting each of the original translators to propose a new translator, repeating the process of sequential versions.
from Irish (2)
Gib mir das Wegrecht
grant me the right of way
Give me the right to go
Give me the right to pass the way
Give me leave to tread
Tabhair cead mo chos dom
Give me the right of way