The following comes via Tom Clarks’ blog — which you all should check out: he has been posting regularly on Gaza.

When Ahmed Owedat returned to his home 18 days after Israeli soldiers took it over in the middle of the night, he was greeted with an overpowering stench.
He picked through the wreckage of his possessions thrown from upstairs windows to find that the departing troops had left a number of messages. One came from piles of faeces on his tiled floors and in wastepaper baskets, and a plastic bottle filled with urine. 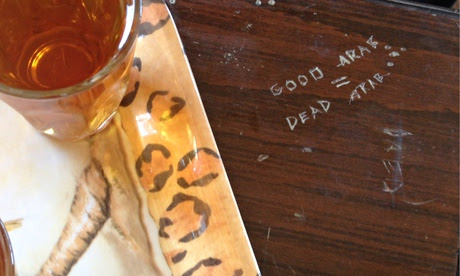 Some of the graffiti Ahmed Owedat found on returning to his home in the town of Burij: photo by Harriet Sherwood, 6 August 2014
If that was not clear enough, the words “Fuck Hamas” had been carved into a concrete wall in the staircase. “Burn Gaza down” and “Good Arab = dead Arab” were engraved on a coffee table. The star of David was drawn in blue in a bedroom. 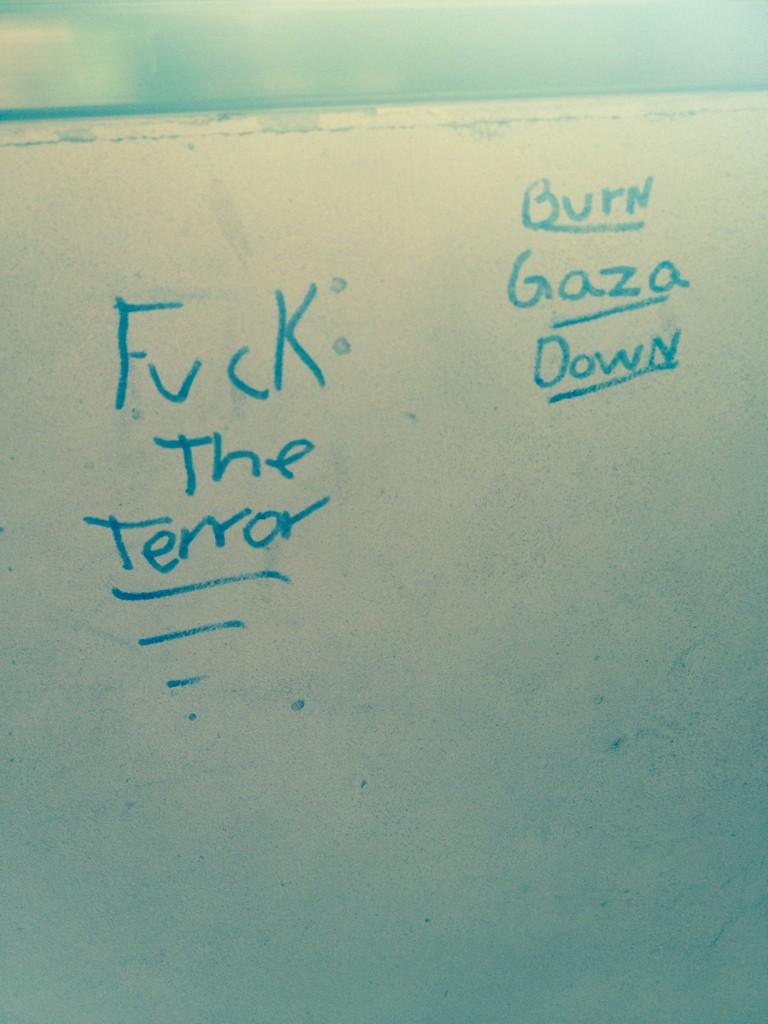 Graffiti left by Israeli soldiers in a house where they’d stayed during the ground invasion: photo via Hazem Balousha on twitter, 6 August 2014
“I have scrubbed the floors three times today and three times yesterday,” said Owedat, 52, as he surveyed the damage, which included four televisions, a fridge, a clock and several computers tossed out of windows, shredded curtains and slashed soft furnishings.
A handful of plastic chairs had their seats ripped open, through which the occupying soldiers defecated, he said. Gaping holes had been blown in four ground-floor external walls, and there was damage from shelling to the top floor. There, in the living room, diagrams had been drawn on the walls, showing buildings and palm trees in the village, with figures that Owedat thought represented their distance from the border.
“I have no money to fix this,” he said, claiming that his life savings of $10,000 (£6,000) were missing from his apartment.
But at least it could be repaired, he acknowledged, gesturing through the broken glass at a wasteland stretching towards the Israel-Gaza border 3km away. “Every house between here and there has been destroyed.”
His family of 13 fled their home after seeing troops and tanks advancing at 1am on 20 July, two days into the Israeli ground invasion. Several times, during the short-lived ceasefires in the following two weeks, they attempted to return only to find Israeli troops in their home instructing them to keep away. 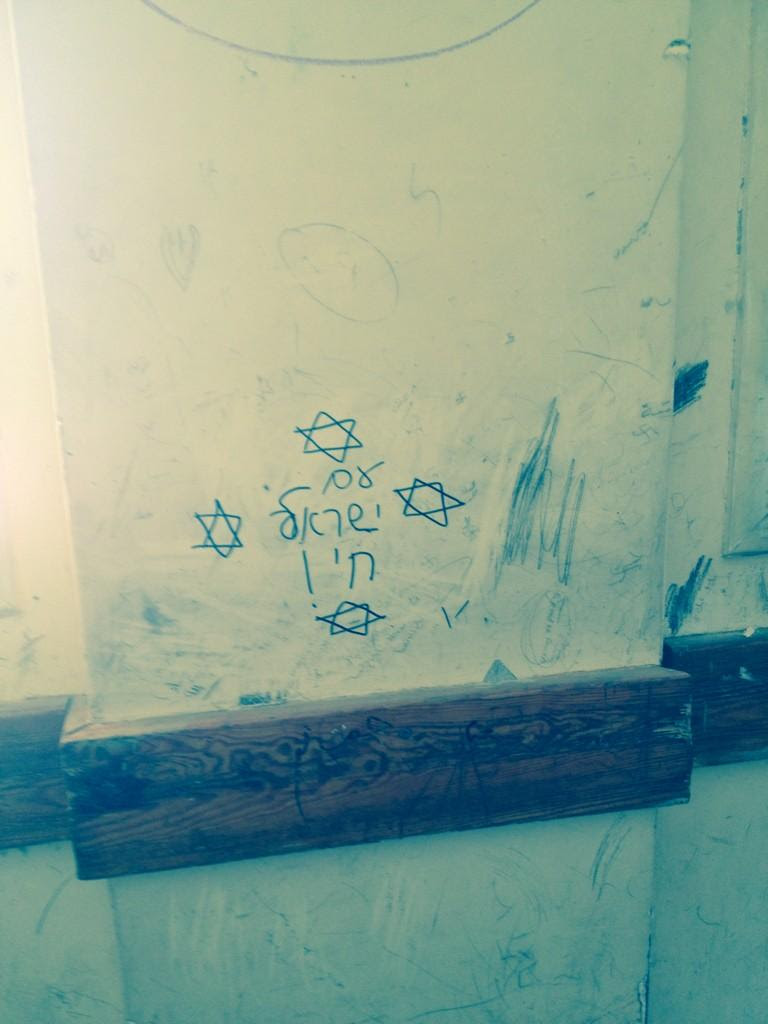 Graffiti left by Israeli soldiers in a house where they’d stayed during the ground invasion: photo via Hazem Balousha on twitter, 6 August 2014

The Israel Defence Forces did not respond to a request for comment. 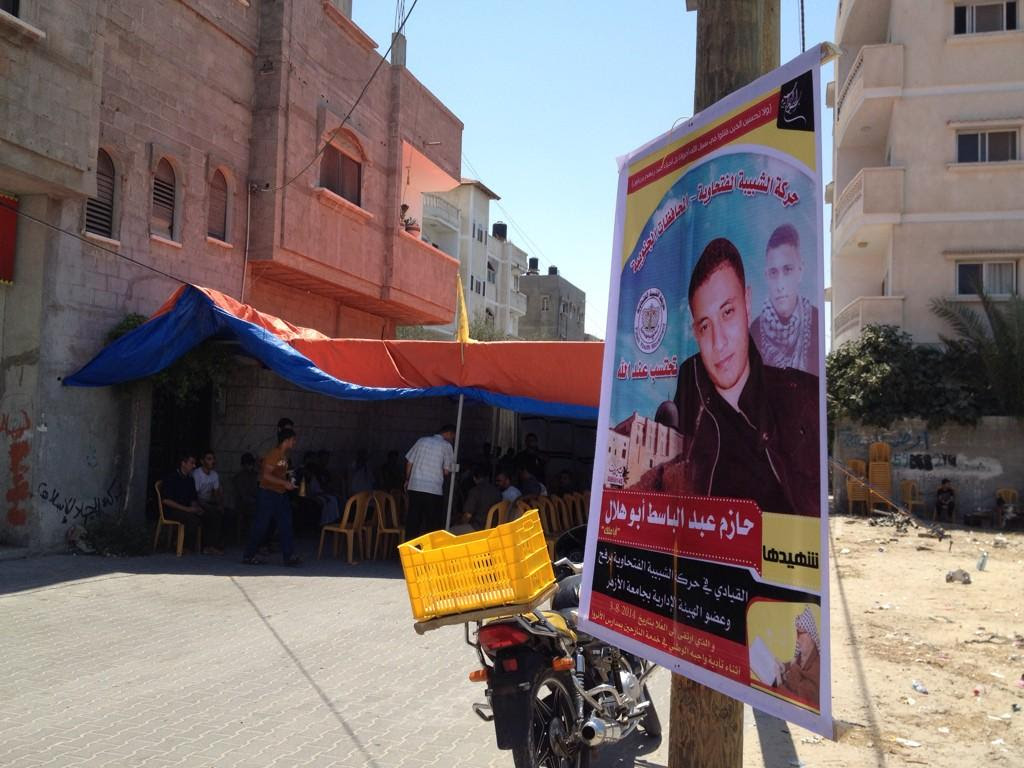 For the first time families of killed people in Gaza are able to have mourning tents today, during the 72 hours ceasefire: photo by Hazem Balousha via twitter, 5 August 2014

Half an hour’s drive north, a similar picture was found at Beit Hanoun girls’ school, taken over by the IDF following the ground operation. Broken glass and rubble littered the floors and stairs. Tables and desks were covered in the abandoned detritus of an occupying army: hardened bread rolls, empty tins of hummus, desiccated olives, cans of energy drinks, bullet casings. Flies buzzed around the rotting food. 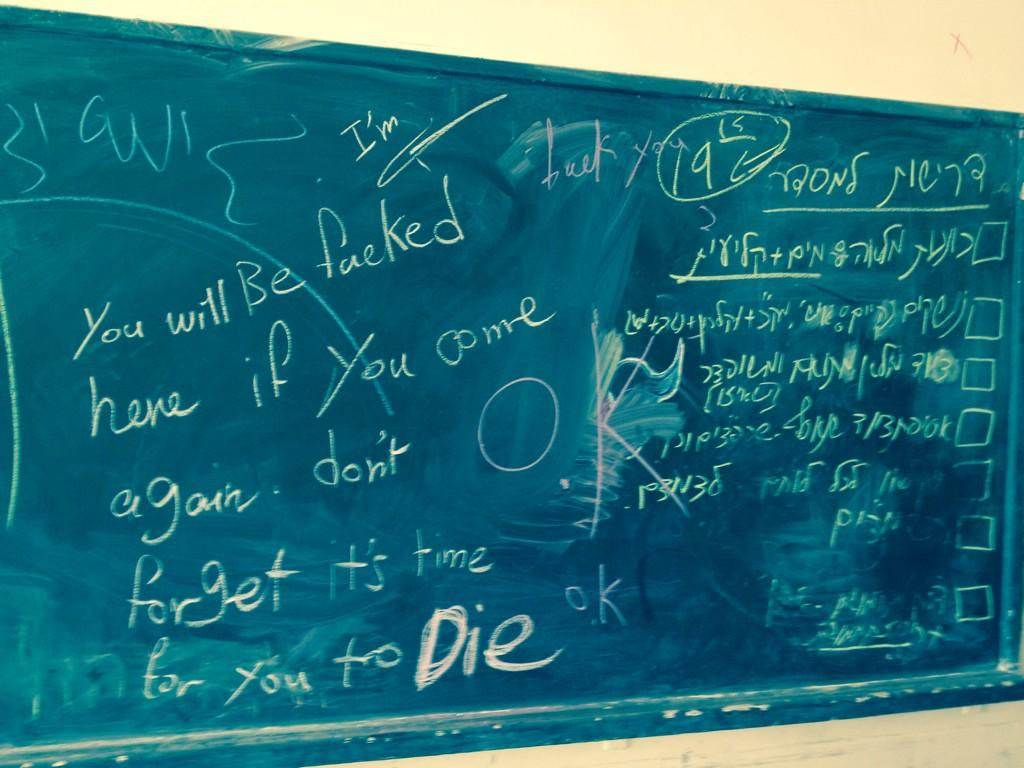 Graffiti left by Israeli soldiers at Beit Hanoun girls’ school: photo via Hazem Balousha on twitter, 6 August 2014
Here too, said the school’s caretaker, Fayez, who didn’t want to give his full name, soldiers had defecated in bins and cardboard boxes, and urinated in water bottles. “You will be fucked here” and “Don’t forget it’s time for you to die” were chalked in English on blackboards.
Here, Hamas had struck back. After the troops pulled out, counter-graffiti was sprayed on the walls, referring to Hamas’s militant wing, Qassam brigades. “Qassam’s army will crush you — dogs” and “Israel will be defeated”.
The 1,250 pupils at the school will, it is hoped, never see either set of venomous messages. Workers began the marathon cleanup operation this week but, said Fayez, “it will take at least a month to fix”. The academic year is due to begin in a little over two weeks. 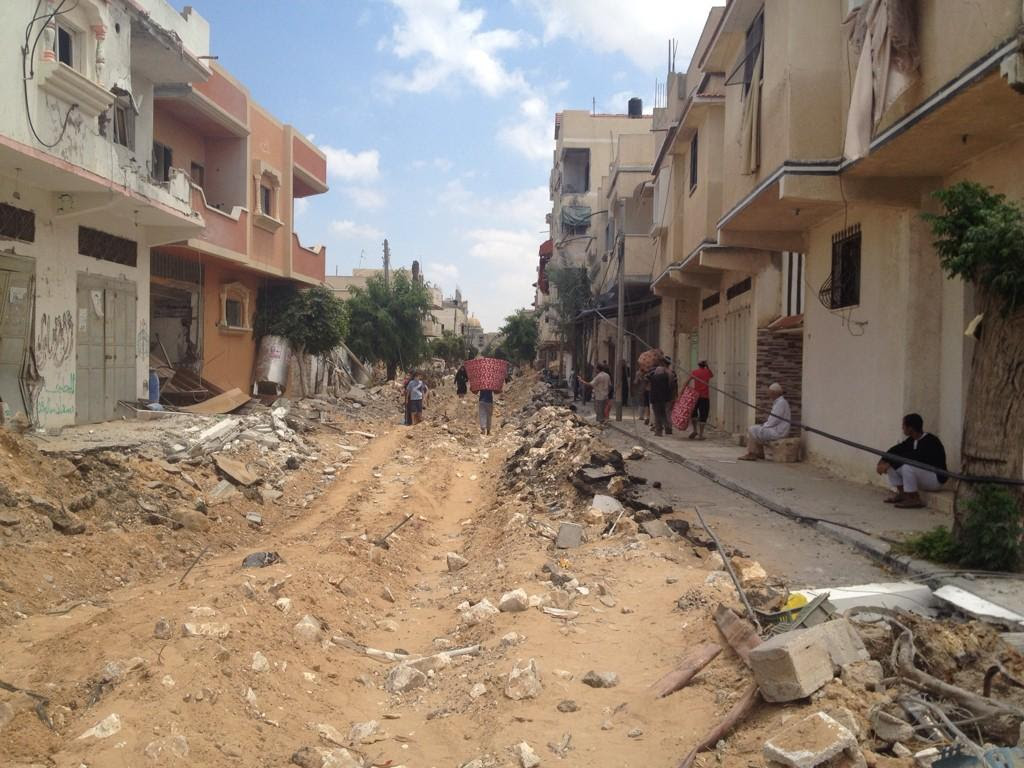 Some of devastation I have seen today in Khuzaa village east of Khanyounis: photo by Hazem Balousha via twitter, 4 August 2014

Some time back to the war …

The phrase has covered a lot of mileage.

The verbs are interesting. “Pointed out” would betray the arrogance. “Claimed” would be too impartial. “Admitted” might be the best choice. “The Israeli Defense Minister conceded today that the IDF is ‘the most moral army in the world…'”

Sources for these photos are Guardian correspondent Harriet Sherwood and the internationally recognized Palestinian Journalist Hazem Balousha, whose photos and reports appear regularly in The Guardian, Al-Monitor, and DW World, among other places; he holds a BA in Journalism, an MA in International Relations, and is the founder of the Gaza City-based Palestinian Institute for Communication and Development. 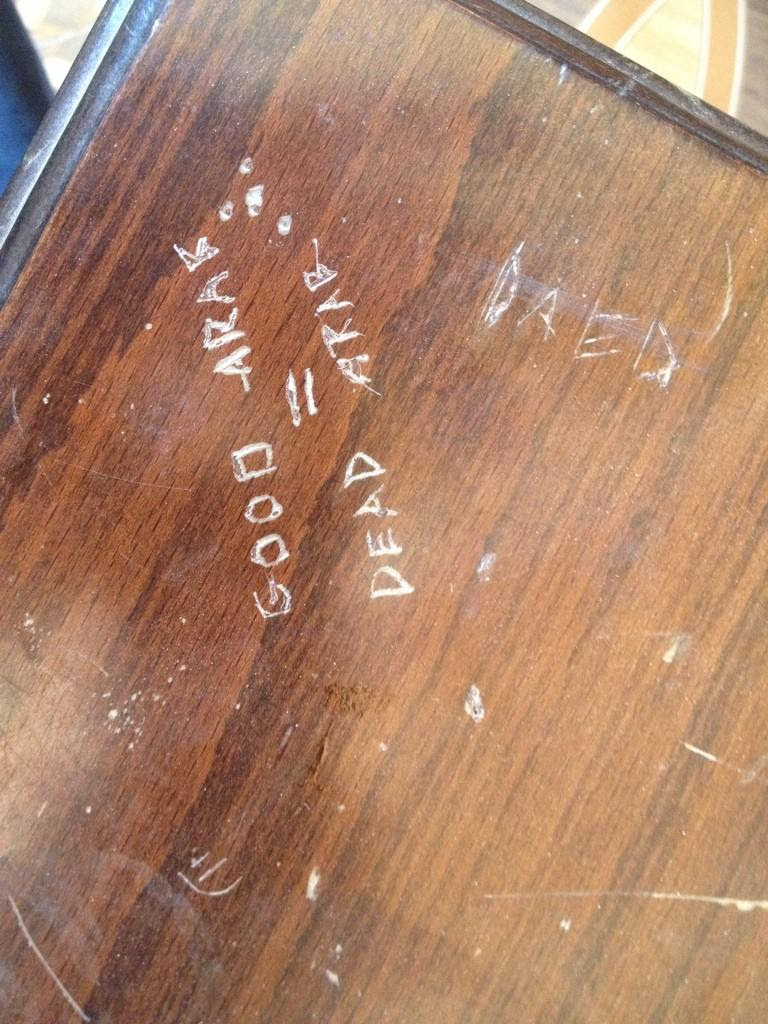 Comment on “Welcome Home Villagers: A window into the minds of the Occupiers (“The most moral army in the world”)”