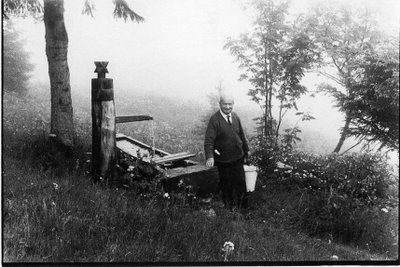 (Photo copyright Digne Meller-Marcovicz)
Couldn’t resist posting a picture borrowed from Adam Sharr’s Heidegger’s Hut book: the one showing Heidegger standing next to his well — the well “with the / star-die on top,” as it appears in Paul Celan’s poem “Todtnauberg”. (I first saw this photo years after I first translated the poem, and it felt strange at first, but then strangely exhilarating to see the actual object I had tried to imagine when I worked at getting “Sternwürfel” into English. As always Celan had been superbly and economically accurate in naming the seen). By coincidence, the day after the Hut-book arrived, I was teaching a class on Celan & Derrida, and had projected to use that poem as an indicator of translation difficulties (a more formal version of that discussion can be found in the essay “Translation at the Mountain of Death,” available on my EPC site.) By a further coincidence on Tuesday, Mark Thwaite, who this week is guest-blogging on the PoetryFoundation site, posted a piece on Celan translations, which you can read here. All of this talk about coincidences reminds of friend Eric Mottram who would arrive at my door for dinner & who, asked about how his day had been, would beam and say: “Wonderful day, imagine: not a single coincidence!” and break into his raucous laughter. But on other days & dates there are coincidences, and some of those days are great too! Below, Celan’s poem on his visit to Heidegger’s hut, in my translation:

Arnica, eyebright, the
draft from the well with the
star-die on top,

written in the book
– whose name did it record
before mine – ?
in this book
the line about
a hope, today,
for a thinker’s
word
to come,
in the heart,

he who drives us, the man,
he who also hears it,

Comment on “"The well with the / star-die on top"”