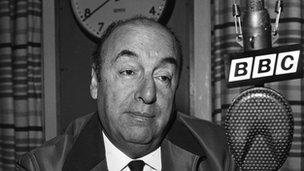 The Communist Party in Chile has asked for the remains of the poet Pablo Neruda to be exhumed due to allegations that he may have been poisoned.

The Nobel laureate died in Santiago in September 1973, 12 days after the military coup that brought Gen Augusto Pinochet to power.

But his former driver said he received an injection which provoked a heart attack.

Mr Contreras said the hospital where Mr Neruda was being treated for cancer says he was injected with a pain killer and died of heart failure shortly afterwards.

But Mr Contreras said Neruda, who was 69, could have received a lethal injection.

The request to exhume the poet’s remains will be considered by a judge, Mario Carroza, who has been investigating allegations that Mr Neruda may have been murdered by the authorities.

Mr Neruda’s personal assistant and driver, Manuel Araya, told the investigating judge in November that a few hours before he died on 23 September 1973, the poet was walking and talking normally.

Mr Araya alleges that agents injected Mr Neruda with poison at the hospital on the orders of Gen Augusto Pinochet.

The Pablo Neruda Foundation, which guards the poet’s legacy, said in a statement in May that there is “no proof whatsoever that suggests Pablo Neruda died of causes other than cancer”.

Although the late Pablo Neruda was best known for his poetry, he was a lifelong member of Chile’s Communist Party, a lawmaker and a former ambassador to France.

He received the Nobel Prize for Literature in 1971.

In May, the authorities exhumed the remains of another towering figure in Chile’s recent history — the former leftist President Salvador Allende.

The remains were exhumed on the orders of the same judge, Mario Carroza, in an effort to clarify whether Salvador Allende committed suicide or was killed by soldiers who stormed the presidential palace during the 1973 coup led by Gen Pinochet.

Two months later, a team of international experts concluded that the former president killed himself.

Mr Allende, who was 65, died in La Moneda presidential palace on 11 September 1973 as it was being bombed by air force jets and attacked by tanks.