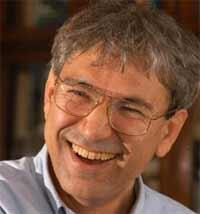 News just in that the Istanbul Court has dropped the case against novelist Orhan Pamuk, accused of “insulting Turkish identity” for having mentioned the Armenian genocide and the massacres of Kurds — a victory (though only a small one) for free speech in Turkey. Here is the official Amnesty International commentary on this development:

Amnesty International welcomes reports on 23 January that the case against Turkish novelist Orhan Pamuk has been dropped. The writer was facing charges under Article 301 of the Turkish penal code after commenting on the deaths of Kurds and Armenians in the Swiss newspaper Tages Anzeiger. Sisli Court of First Instance No. 2 had been awaiting the authorization of the Ministry of Justice to proceed with the case, but reportedly threw it out after the Ministry wrote to the court declaring itself legally incompetent to intervene.

Amnesty International opposes Article 301 on the grounds that it poses a serious threat to the right to freedom of expression, which the Turkish authorities have a legal duty to uphold. The organization analyzed the article and detailed its concerns about the cases against Orhan Pamuk and others in a statement on 9 December 2005, Turkey: Article 301 is a threat to freedom of expression and must be repealed now! (AI Index: EUR 44/035/2005).

The organization’s concerns regarding the breadth of this article and its potential for arbitrary interpretation remain in spite of Orhan Pamuk’s case being dropped. In fact, Amnesty International considers that Orhan Pamuk’s high profile drew attention to the deficiencies of Article 301, and now fears that the cases of other individuals prosecuted under the same article may continue in relative obscurity.

The cases of Hrant Dink, Sehmus Ulek, Ragip Zarakolu, Fatih Tas, Murat Pabuc, Birol Duru and Rıdvan Kızgın, which Amnesty International detailed in its earlier statement, are still ongoing. In addition on 9 December 2005, the Istanbul Court of First Instance No. 2 sentenced Fatih Tas to a prison term of six months for the publication of another book They Say You are Missing [Kayıpsın Diyorlar] by Ali Aydın. The book is a collection of articles and poems about a journalist who went missing during the 1990s. Fatih Tas is currently appealing the decision. The organization is equally concerned about further cases against other individuals who have peacefully expressed their opinions, such as those outlined below.

Journalists Murat Belge, Ismet Berkan, Hasan Cemal, Erol Katırcıoglu and Haluk Sahin are all facing possible prison sentences under Article 301 for newspaper articles they wrote about a judicial decision to ban a conference on the situation of Armenians during the Ottoman Empire. The first hearing of their case is due to be held at Bağcılar Court of First Instance No. 2 on 7 February 2006.

The trial of Halil Altındere, organizer of the 9th Istanbul Biennale, a festival of the arts, is due to begin at Beyoglu Penal Court of First Instance on 13 April 2006. He is charged under Article 301 in connection with a photograph exhibition which is allegedly “insults” the army.

The Beyoglu Public Prosecutor has brought a case against Abdullah Yıldız, chief editor of Literatur Publishing House under Article 301, after the publication of a translation of a book entitled The Witches of Smyrna [Izmir’in Falcıları] by Greek author Mara Meimaridi. The book is alleged to portray the Turkish people in a bad light. The case is due to be heard on 6 April 2006.

Professor Ibrahim Kaboglu and Professor Baskın Oran, respectively former head and committee member of the Human Rights Committee under the auspices of the Prime Minister’s Office, will go on trial on 15 February 2006 charged under Articles 216 and 301 for a report produced on Minority and Cultural rights at the request of the Prime Minister himself.

On 22 December 2005, Istanbul Penal Court of First Instance No. 2 sentenced author Zulkuf Kısanak to five months’ imprisonment on charges of insulting the Turkish Republic in his book How the Inheritance of Thousands of Years was Burned: Lost Villages [Bin Yılların Mirası Nasıl Yakıldı: Yitik Koyler]. The sentence was commuted to a fine of 3000 YTL [c. US$ 2,260].

The dropping of the case of Orhan Pamuk is too small a step on the road to freedom of expression in Turkey. Amnesty International regards the incident as further evidence of the arbitrary nature of Article 301. It calls on the Turkish authorities to terminate all cases pending under the article, and for the article itself to be abolished in its entirety.