via the always excellent Arab Literature (in English)

Why Did ‘Other Press’ Stick Through Heated Auction to Get Debut Algerian Novel?

Algerian journalist Kamel Daoud’s Meursault, Counter-Investigation was the subject of a heated auction at this year’s Frankfurt Book Fair. Why did Other Press stick it out to acquire world English rights? 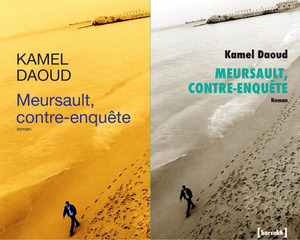 First — and most obviously — Meursault was one of the final four in running for France’s biggest literary prize, the Prix Goncourt. The book also won the Five Continents Prize and was longlisted for the Renaudot. It’s a bestseller in France, which surely doesn’t hurt its chances at being translated.

The novel, Daoud’s first, is a response to Albert Camus’s The Stranger. According to Words Without Borders reviewer Suzanne Ruta: “In 2010 a French reporter…irritated Daoud by raising the tired question of whether Camus belongs to France or Algeria. … He went home and wrote a riff onL’Étranger, in the voice of the imagined younger brother of the unnamed “Arabe” shot five times by Meursault on that fateful Algiers beach in 1942.”

As to the reason Other Press wanted the book so badly, Gurewich said:

Because it is rare that a literary novel brings to the table such important, counter-intuitive and explosive ideas about postcolonialism, identity, religion, guilt and ambivalent identification with the aggressor. Daoud turns his conversation with Camus into a suspense story, whose emotional impact is as intense as its philosophical implications. I would have been devastated to lose this book. It is at once a political manifesto and a love story.

Gurewich also says that publishing the book in the US won’t be a challenge:

It is too good to be true. Young people will feel the book evokes familiar themes–identity, country in turmoil, the deceptive power of religion, politics, discrimination, ambition, rage–and their parents will be happy to remember their school years and a book they have surely forgotten but would want to revisit.

Algeria, of course, isn’t front and center in the American mind as it is for the French. But Gurewich said that she aimed to make the launch newsy by asking “Daoud, who is an award-winning journalist, to write some articles and op-eds explaining his views on the present situation in the Magreb and maybe extend them to the Middle East as a whole.”

The book also fits the image of the courageous Arab author speaking out against religious fanaticism: “I think that this book is very provocative in the sense that it really exposes the avatars of Arab identity today and also the dangers of religious fanaticism. It is hinted in the book that religion may have well replaced the authoritarian colonial rule that preceded it. Daoud is a very outspoken and courageous man.”

Indeed, this particular shaping of religiosity is perhaps one reason the book was criticized by some  Algerian readers.

The book has currently sold in 13 countries.