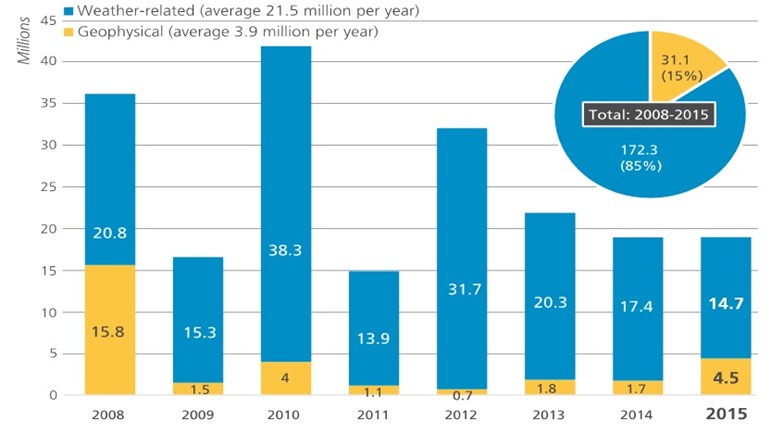 Environmental hazards affect populations worldwide and can drive migration under specific conditions. Changes in temperature levels, increased rainfall variability, and rapid-onset disasters, such as tropical storms, are important factors as shown by a new study led by the Potsdam Institute for Climate Impact Research (PIK). Environmental migration is most pronounced in middle-income and agricultural countries but weaker in low-income countries, where populations often lack resources needed for migration. The findings make it possible to identify geographical regions that may be especially susceptible to migration movements in the future.

“Environmental factors can drive migration, but the size of the effects depends on the particular economic and sociopolitical conditions in the countries,” says lead author Roman Hoffmann from PIK and the Vienna Institute of Demography of the Austrian Academy of Sciences. “In both low and high income countries environmental impacts on migration are weaker – presumably because either people are too poor to leave and become basically trapped, or, in wealthy countries, have enough financial means to absorb the consequences. It is mainly in regions with middle incomes and a dependency on agriculture that we see strong effects.”

Environmental impacts differ by contexts and types of hazards

The meta-study, which analyzed 30 previously published studies on the topic, reveals a number of fascinating patterns. It shows, for example, that impacts on migration vary by types of environmental hazards and that different hazards can re-inforce each other. “While changing temperatures in a region are found to have the strongest impact on migration, also rapid-onset disasters and changing rainfall variability and anomalies can play a role. Especially smallholder farmers rely on steady climatic conditions and suffer from changes and shocks as they have insufficient capacities to adapt,” says co-author Raya Muttarak from the International Institute of Applied Systems Analysis and the Wittgenstein Centre for Demography and Global Human Capital (IIASA, VID/ÖAW, University of Vienna).

The researchers emphasize that there is no automatism at play – environmental migration always depends on a number of economic and sociopolitical factors. The narrative of climate refugees pushing towards Europe or the US may be too simplistic. For instance, the researchers found compelling evidence that environmental changes in vulnerable countries predominantly lead to internal migration or migration to other low- and middle-income countries, rather than cross-border migration to high-income countries. Affected populations often migrate to places within their own region and eventually return to their homes within a relatively short period of time.

The findings, published in the latest issue of Nature Climate Change, also hint at regions highly vulnerable to climate change where environmental migration may be particularly prevalent. “Our research suggests that populations in Latin America and the Caribbean, several countries in Sub-Saharan Africa, especially in the Sahel region and East Africa, as well as Western, South and Southeast Asia are particularly at risk,” says co-author Anna Dimitrova from the Vienna Institute of Demography, Austrian Academy of Sciences.

Given the expected rise of the global average temperature the researchers believe that the topic of environmental migration will become more important in the future. Consequently, interventions have to be tailored to the actual situations on the ground that reduce vulnerabilities. “The best way to protect those affected is to stabilize the global climate, namely to rapidly reduce greenhouse gas emissions from burning fossil fuels,” concludes Jesus Crespo Cuaresma from the Vienna University of Economics and Business and IIASA. “While migration can be an effective adaptation strategy for households, it can be involuntary and come with unacceptable human suffering – unacceptable because it indeed can be avoided.”

PIK press office
Phone: +49 331 288 25 07
E-Mail: press@pik-potsdam.de
www.pik-potsdam.de
Who we are: The Potsdam Institute for Climate Impact Research (PIK) is one of the leading research institutions addressing relevant questions in the fields of global change, climate impacts and sustainable development. Natural and social scientists work closely together to generate interdisciplinary insights that provide a sound basis for decision-making for society, businesses and politics. PIK is a member of the Leibniz Association.