I will be in Chicago for readings (more details on that later) so I will have to miss the occasion, but people in the NY area should definitely try to go. Tuli is a culture hero activist Bodhisattva of major proportions — & right now he can need all our help. This, via the Allen Ginsberg Project: 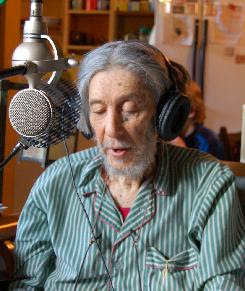 For those of you in the NYC area, we’ve go an amazing lineup of talent coming out to support Tuli Kupferberg.

Kupferberg suffered two strokes in April and September 2009 which left him virtually blind, confined to his apartment and in need of 24-hour care. He is recovering well—he is able to speak clearly—but has overwhelming medical ($3,500 a month!) expenses not covered by Medicare or the very modest publishing/royalties income he earns at the age of 86. A number of his friends and admirers are coming to his aid by performing in a benefit concert produced by Hal Willner, including his fellow Fugs, Jeff Lewis, John Kruth and an all-star band, Lou Reed, Sonic Youth, Pete Stampfel, John Zorn and others who will be announced soon.

If you can’t make the show, you can still make a tax deductible donation through the Fugs’ website >>